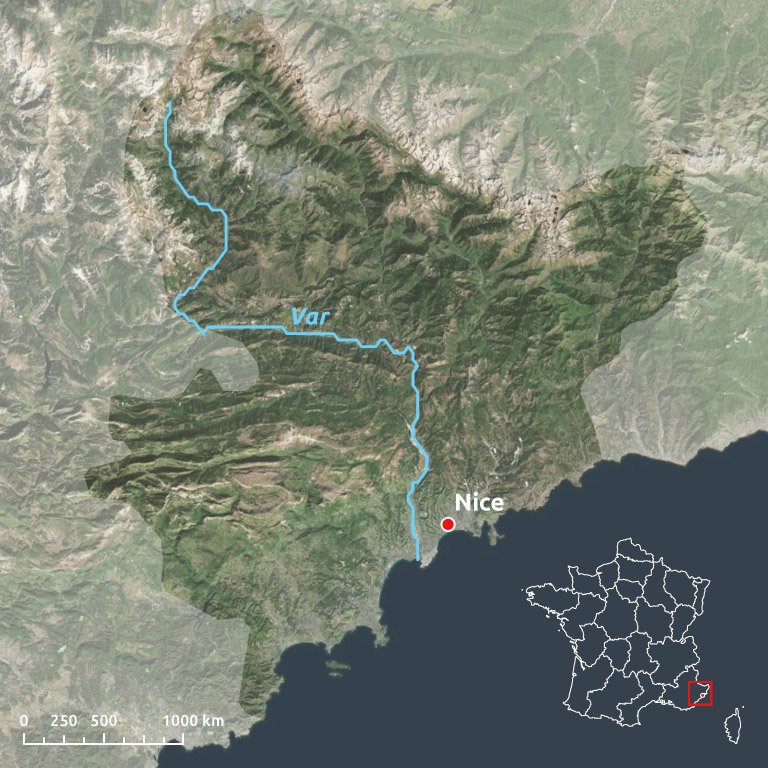 The Var is an Alpine torrential river with steep slopes. Located in the southeast of France, it has a total length of 114 km / 71 mi, with the Tinée, Estéron and Vésubie as its main tributaries. The Var rises near the Col de la Cayolle in the Maritime Alps and flows generally southeast – mainly through the Alpes-Maritimes with a short stretch in the Alpes-de-Haute-Provence – into the Mediterranean between Nice and Saint-Laurent-du-Var.

The river section concerned in this project is the Lower Var, which was previously running freely between the valley slopes. Those featured large, very mobile gravel bars composed of coarse bed material. From the early 19th century on until the 1960s the river was canalised over the entire length of the lower valley, reducing its width from about 1000 m / ⅔ mi (in average between valley slopes) to a mere 300 m, and even 200 m in the last stretch close to the sea. To compensate the lowering of the river bed as a result of the extraction of building materials, sills (fixed weirs) were constructed to bring the water table back to its original level.

On November 5, 1994, an extreme flood event caused the lowest and the second-lowest dams on the Var to collapse. The flood wave inundated parts of Nice, including Nice’s international airport which is situated near the river mouth. It was out of service for several days. The aeroport lost the business of 50,000 passengers, with damages running up to an estimated 4.5 to 6 million euro. Elsewhere roads like the RN202 were cut, power and telephone lines were interrupted, and three people died and four disappeared.

In 1994 a new highway was planned, situated in part on the right bank of the Var. This would result in a further reduction of the river bed in the order of 10%. The plans met with strong opposition from the riparians, who fought the proposed highway in the Administrative Court. They requested the expertise of Professor Peters to scientifically substantiate their grievances from 1998 on.

Following the Tribunal’s decision in 2001 to further investigate the matter, Professor Peters was tasked to follow up the physical model tests. In an order dated November 12, 2002, the President of the Court appointed a panel of five (including Professor Peters) to act as experts for the Administrative Court of Nice. At the request of the prefect of the Alpes Maritimes Professor Peters was challenged because of his earlier involvement in the lawsuit on behalf of a counterparty. The highway was eventually built along a modified itinerary and under a different name. The proposals from Professor Peters were taken into account, primarily regarding dam number four.